... or get your name into the "contributions"-section!

- One thing I'd love to realize would be reflashing the wavetable ROM directly on board. This would need a special piece of software to do so and most likely some adjustments to the hardware. While I'd be pleased to do the later, I really suck at programming and this would easily extend the scope of my skills. If all works out well it's also your chance to get your hands on a prototype card before the final run (for testing/debugging your software), so you can enjoy the ARGUS project before anyone else!

- The contents for the wavetable ROM are still under copyright! The copyright holder is also still around. I've contacted them once in the past and got a generally quite positive reply, but sadly my second e-mail remained unanswered, same with my third attempt to reach them. Maybe one of you wants to work out a deal there? Otherwise you will have to work out a way to get said data on your own or live without the wavetable ROM, meaning no MIDI and no soundblaster emulation support (the later checks for the presense of said ROM, even tho it's not exactly required) unless you manage to read out an original IW78C21M1 chip (which involves unsoldering it from an InterWave card first or somehow get your hands on a dump of one of those) and programm a compatible one yourself (the board has support for 29F800 chips). I can give you some basic aid on how the IW78C21M1 -> 29F800 process works and I can confirm it's working, but certainly not provide you with the required data for programming as it's not my copyright. Having a way to legally obtain the wavetable data would make things a lot easier for a lot of people.

If you feel like you're the right person for either task, give me a ring at "mos6502cKITTYatDOGGYgmailPIGGYdotBIRDYcom" (remove the uppercase animals for my e-mail adress [they're: kitty, doggy, piggy and birdy]) or contact me on the VOGONS/Dosforum/VzEkC forums (my nickname is "shock__" on the first and the last, "Shockwav3" on the other). I can supply you with the "InterWave Programming Guide" or the contact information and earlier dialogue to get you started.

Also managed to solder the InterWave chips to 2 of the 3 boards, after realizing the solder paste I had has gone beyond its' best before date. Which resulted in prototype #1 getting 2 reworks before getting a proper soldering job done.
This is how things look when done right btw (certainly not perfect, but good in my book): http://i.imgur.com/QejwhkA.jpg
I expect to have a prototype being detected under DOS in a month if everything works well (still have to order a few parts).
Also here are 2 mockups to get a slight impression on how the assembled card will look like:
http://i.imgur.com/ETCN7VB.jpg & http://i.imgur.com/OzDhXBX.jpg
Also ... do not worry, the finally run will be blue with a gold finish. It just wouldn't have made sense for the prototypes, as this would have _majorly_ increased the price at no real benefit. In the final run the additional costs for those features are barely noticeable when you divide it by the amount of cards being made.

I've been starting to gather a bill of materials for the prototype and as it turns out one of the crystals can't be easily found in your average "around the corner" electronics store but is rather limited to major distributors like digikey/farnell/etc. - as I currently have a bit of excess from the donations with that being just the right amount the 16.9344MHz crystal will be included with every PCB.

After going a bit on a "hiatus" this project is back to life.
Prototype #1 will be ordered tomorrow - quite excited about this.

PCB layout has remained the self since June, except for the DIP-variant of the PNPROM getting removed. Afterall it would be the only DIP IC on the board _and_ would potentially interfere with the RAM stick.

Also a shameless plug: matze79 of DOSForum/VOGONS has decided to build my "Disney Sound Source Wrapper" board for simple Covoxes (remember the DSS has some active components) - check it out here: https://www.youtube.com/watch?v=LUCiWou-xcs

Since this blog got very little love recently, here's some exclusive eye-candy as an update :)


Basically: Prototype 1 is being produced as we speak.
Other stats and tidbits will follow very soon.

After a bit of fiddling (turned out 1 of the TTL logic chips on my reference card went bad) I can now confirm that the IW78C21M1 custom chip can be substituted with off the shelf 29F800 flash-ROMs. Pinout is almost identical just pin44 needs to be held high (it's not used on the IW78C21M1 and "left hanging" on most cards). Final clue gave the Reveal WavExtreme 32 I got donated for the project which had a solder bridge to connect said pin to +5V.

So let the pictures speak :) 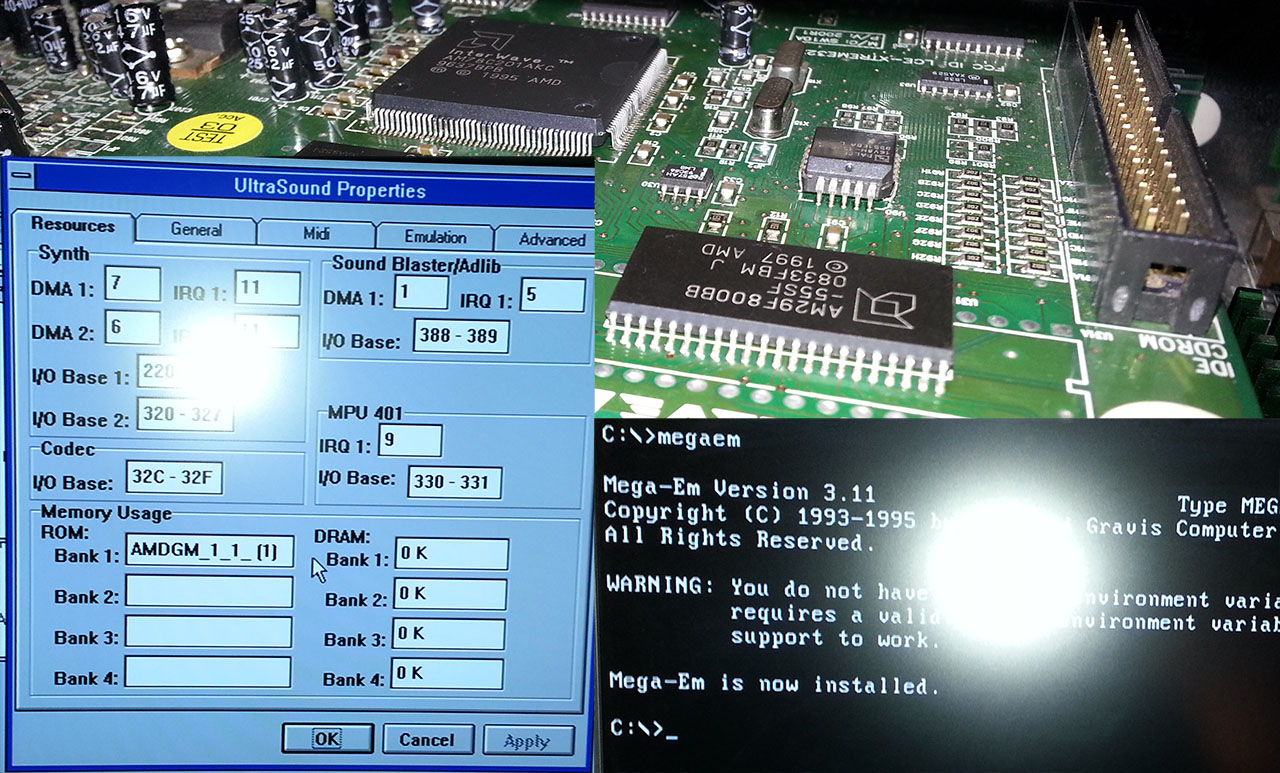 So what's the current status?
The SIMM72 slot has been integrated into the layout as well as 4 sets of jumpers so you can select whether you want to use the SIMM slot per bank (4MB max.) or the SOJ chips (256k) this allows users who just want GUS classic compatibilty to leave out the SIMM72 slot all together. Also those jumpers can be used to completely disable banks if desired - therefore you'd get pretty much any option you'd get with a modded GUS PnP, except for 1MB per bank (unless you're using a 4MB SIMM).
The SIMM72 slot can either be a straight, 45° or 90° one (angled ones can be tough to source, so I decided to go with all options).
There are just some smaller lose ends that need patching up, then I can do a final checkup on the layout and have a first prototype produced - I expect that to happen within the next 2-4 weeks.

I also did pick up the InterWave chips - 196 + 2 (I still had for samples) can therefore be used in this project :) 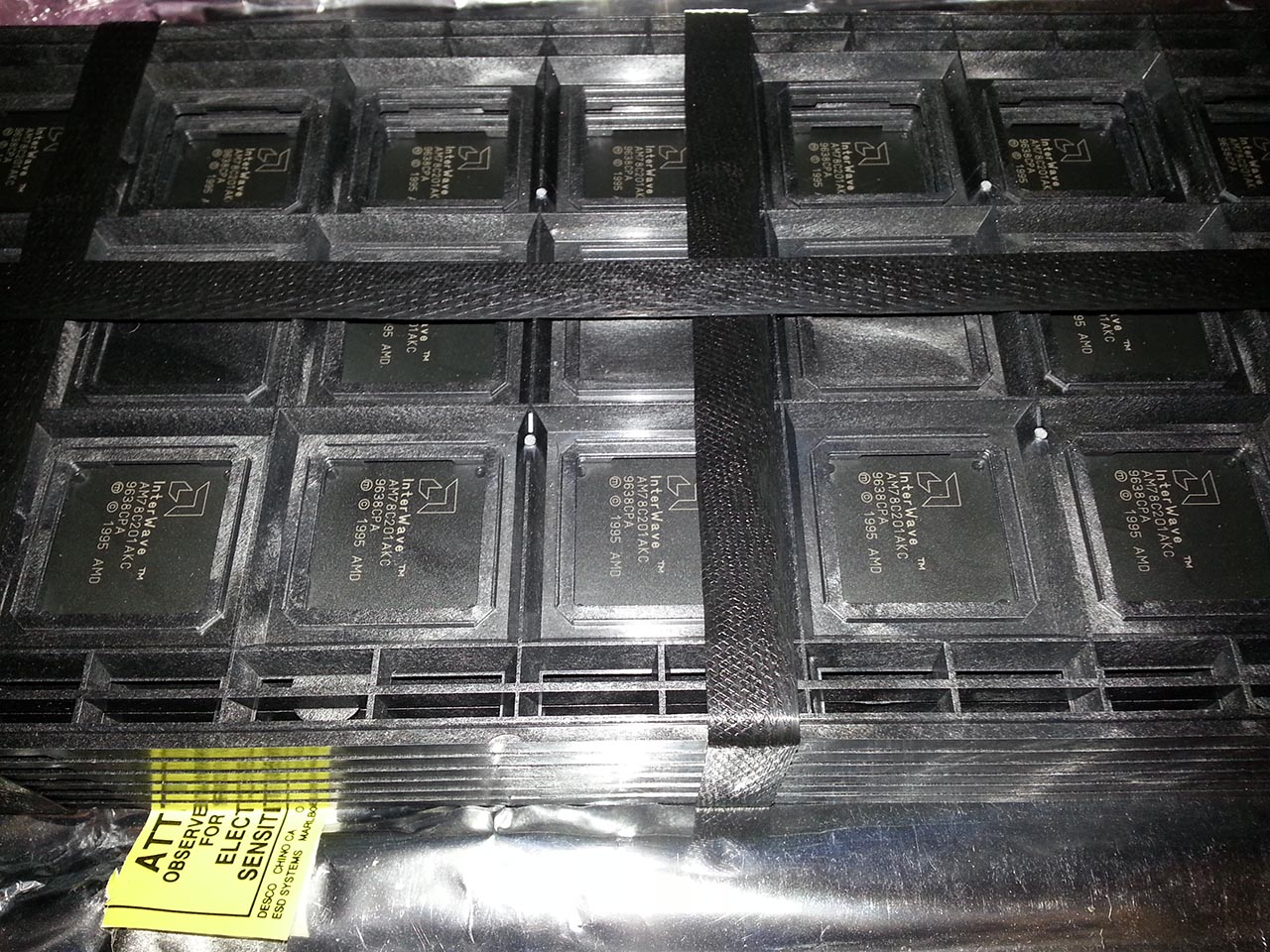 Marmes also just got around to reading out the ROM chips I sent him and is sending me back a preprogrammed 29F800 so I can further test/develop the DIP option for the ROM. The board will have 2 footprints for the ROM, one for using the original IW78C21M1 chips as well as a DIP socket for derivates. Both banks can be switched via a jumper, so you can have 2 sets of ROMs.
I'm also in contact with the original developer of the soundbank used in that ROM chip, who seems extremely cooperative, so a deal for individually licensing the ROM contents seems very possible (distributing the contents would be warez).
In theory the hardware supports up to 16MB for the ROMs as well - no idea though if I will incorporate that tho, since it would require hacking up the binary drivers and no ROMsets existing for that size anyways.

I've also decided on a limit of 3 cards per donor/contributor - as the PCB plant has a limit of 119 per order. This would still cover every donor/contributor (if everyone decides to take the maximum amount), but a second batch certainly isn't impossible in case more folks decide to opt into the project (remember, PCBs will only be distributed among folks who donated or contributed ... outside folks will get a schematic).

Basic schematic and layout is done - now off to add some candy.
PCB size will increase a little, but due to the quantity of the cards that will be made it will only have a really small impact on the pricing. Also allows me to add 2 footprints for the ROM (SMD - based off the IW78C21M1 and DIP).

Just bought 196 AM78C201AKC chips (NOS) since I confirmed them as compatible to the earlier KC revision :)

But I'll let the pictures speak for themselfes.

Everything works as it did before ... tested a bunch of demos using different sound routines, various trackers/players (Impulse tracker ever notices the difference of a Rev. B and Rev. C chips) and a few games using different ways of speaking to the GUS ... and at last Wolf3D using MegaEm.

... with a cold, but slowly progressing on the project.

I've ordered 3 AM78C201AKC chips as samples to confirm they're pin- and logic-compatible with the earlier KC revision. If that works out I should have found a really nice source for the chips. They're probably going to arrive here very soon (seller decided to send them via Express!).

Contrary to earlier posts I've decided to accept financial donations - I set $270 as an initial goal which was reached in less than 6 hours! You folks are incredible. In fact I overshot my target by a bit. Every donor will be mentioned on the PCB of course (11 as of now) and all excess will flow into further features or offering the cards cheaper ... that way everyone wins - and of course gain access to ordering a not yet considered amount of cards (I want people to enjoy the cards, but keep scalpers away - therefore there will probably be a limit of 3 or 5 cards per person - each with their individual serial number of course).
In case someone who isn't on VOGONS or the German DOSForum wants to donate - please don't hesistate to contact me via the following e-mail adress (which is _NOT_ linked to my PayPal account):
MOS6502CLITTERBOX@SCRATCHPOSTGMAIL.COM (remove the cat accessories from that adress [they're LITTERBOX and SCRATCHPOST] and you have my e-mail)

On the productive side, I haven't done too much since I came back (the PCB layout is finished except for some finetuning to make it suitable for a first prototype [additional headers/footprints] with the schematic being at the same point ... as of now it would probably go as a "replica" if you remove the contributions/thanks-section), but went and bought solder paste and started a few first attempts at soldering QFP - certainly not that easy, but I can kinda reliably solder that as of now ... still gonna train a little more before I attempt to solder an InterWave chip. Soldering the SOJ packaged RAM onto my reference card was quite a cakewalk tho :) Not perfect, but quite good for a first attempt http://i.imgur.com/L7fAx1T.jpg

Other than that ... oh, I did a video for the project I did before ... a Disney Sound Source emulator made from off the shelf parts.
Enjoy.
https://www.youtube.com/watch?v=EoGCf69QLJc
Collapse